Sculpting in bronze since 1994, Jeff Decker has been involved with the Motorcycle Cannonball since it was just an image in Lonnie Isam, Jr.’s mind’s eye. As a rider, he’s been along on many of the miles along the lesser known roads of the run but he’s also held another stake in the event. From the very beginning, Jeff has provided the handmade and highly coveted award for the First Place rider. Known for his incredibly detailed, larger-than-life sculptures like the ones at Legends Motorcycle Emporium in Utah and the Harley-Davidson Motorcycle Museum in Wisconsin, owning a piece of Decker art is its own reward to say nothing of the absolute elation of winning a Motorcycle Cannonball Endurance Run! 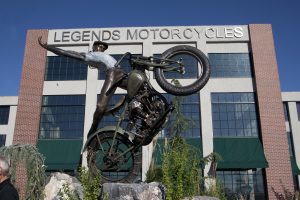 Decker Cannonball sculptures have left America to live with riders as far away as Germany and South Africa as well as three awards that have stayed stateside. Kartin Boehner took home the bronze in 2010, American Brad Wilmarth got his sculpture in 2012. South African rider, Hans Coertse, carried his award across the seas in 2014 and in 2016 the award stayed in America with New York rider, Frank Westfall, who has participated in every Cannonball run. For 2018, Decker changed things up and created an all original, first-time Motorcycle Cannonball bronze wall hanging that was taken home to California with winner Dean Bordigioni. For the 2020 run, there’s no telling what Jeff might come up with but rest assured, it will be incredible!